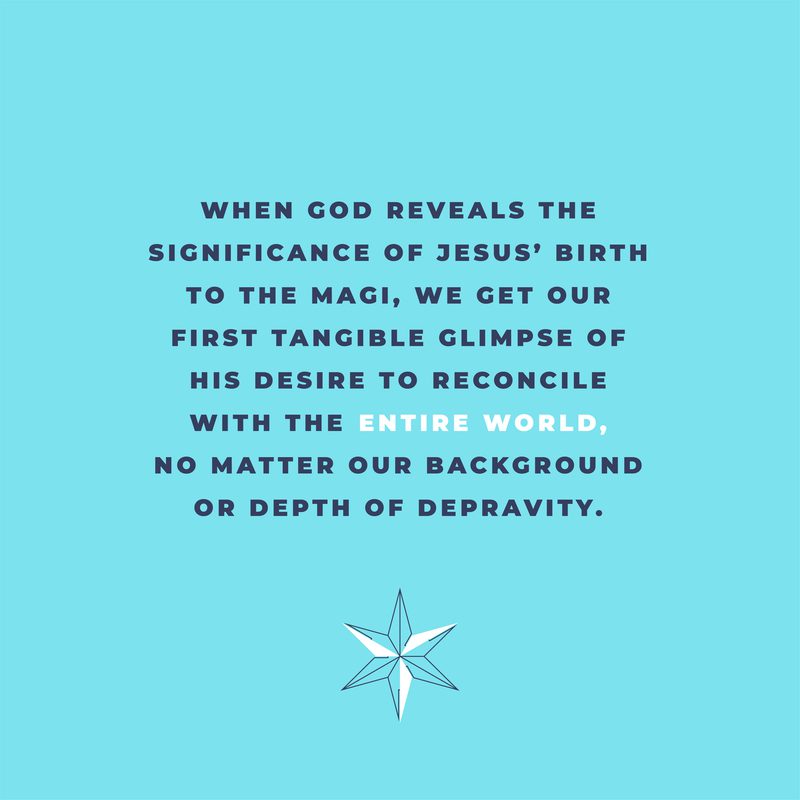 God’s Heart For The Whole World

Magi were known to be astrologers, which explains why God used a star to guide them to Jesus. He knew how He could get their attention. As astrologers, it’s very possible the Wise Men we include in our nativities at Christmas were sorcerers who interpreted omens and signs to gain power. There are many theories about the ethnicity and background of these men from the East, but there’s one thing we know for sure: They were not Jews. They were Gentiles.

For centuries, people assumed the Savior would come specifically to deliver the Jews, God’s chosen people. It’s a reasonable assumption, because they were constantly persecuted by surrounding Gentile nations who worshipped false gods. If the One True God was coming to earth to establish His eternal Kingdom, surely it was for the sake of the Jews.

But when God reveals the significance of Jesus’ birth to the Magi, we get our first tangible glimpse of His desire to reconcile with the entire world, no matter our background or depth of depravity. This is an important moment, especially for those who are not of Jewish descent. While Jesus was born with a pure Jewish lineage and certainly came to redeem the ones He’d chosen from the start, He also came to bring all people back into relationship with their Creator.

In Acts 15, the apostle Paul acknowledges that the Holy Spirit no longer distinguishes between Jews and Gentiles. Anyone who has faith in Jesus has become a chosen child of God. Paul goes further in Colossians 3, saying, “Here there is not Greek and Jew, circumcised and uncircumcised, barbarian, Scythian, slave, free; but Christ is all, and in all.” Jesus made it clear in the Great Commission that He desired all nations to know Him. His heart is for the world!

Prayer: Jesus, thank You for coming to save a world that disowned You for so long. Thank You for wanting a relationship with me when I was completely unrighteous and separated from You. I know You love the entire world, and I want to be Your hands and feet continuing to reach out to those far from You. Use me to carry Your love to the nations.

This is a text widget, which allows you to add text or HTML to your sidebar. You can use them to display text, links, images, HTML, or a combination of these. Edit them in the Widget section of the Customizer.